The Consort controllers R36xx are delivered with a digital communication port of the type RS485.

This type of digital port allows to connect up to 31 controllers on the same lines to one communication port. The interconnecting cables can have a length of up to 1000m. There exists also data converters which can place the signals on a computer network.

All measurements can easily be read by the computer or sent automatically by the device.

The aim of this page is to describe how to use this RS485 port.

The RS485 port of the controllers exists of 3 terminal screws. These terminals should be interconnected with another RS485-port using a shielded Twisted Pair cable. The easiest to find and usable cable is a computer network cable, type CAT5 or better.

When connecting more than 1 controller, all these should be connected in parallel on this network cable: 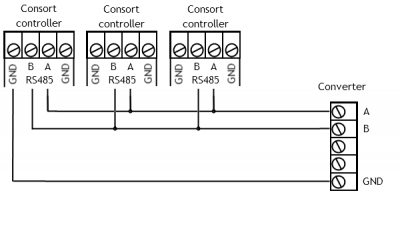 This RS485/USB converter transforms the RS485 signals to USB and vice versa and allows to communicate via a USB interface from a computer. The converter comes with software to set it up and to use it like a virtual communications port.

We use and recommend the converter cable of FTDI: USB-RS485-WE-1800-BT. The coloured wires of this specific cable need to be connected as follows:

The other coloured wires should not be connected to the device. It is best these are insulated to avoid accidental contact with any conductor in the device.

This converter transforms the RS485 signals to Ethernet and vice-verso and allows to communicate via the network interface from a computer. The converter comes with software to set it up and to use it like a virtual communications port.

Our own experience learns us not to use the VCP driver from the converter's manufacturer itself. Use this instead to avoid as much problems as possible: http://new.hwg.cz/download/sw/version/hw-vsp3-single_3-1-2.exe. This free driver has less problems to use.

This converter transforms the RS485 signals to RS232 and vice versa and allows to communicate via the standard RS232-port from a computer. This converter requires the use of a true RS232 port in the computer, not derived from e.g. a USB converter, because it requires its power from one of the RS232 signal lines (DTR).

To allow half-duplex control (Master-Slave), the DIP switches from the RS485 to RS232 converter (Consort article code A2002) needs to be set with the switch nr 1 to ON and all other DIP switches to OFF. The signal direction should be controlled by the computer software (the Master) by means of the RTS line.

When only 1 controller is connected on the RS485 bus, it is also possible to use a one-direction communication without the need of setting the RTS line. Therefore DIP switch 2 should also be set to ON. It depends however on the level of the RTS line whether it is required or not.

A program for reading the data from the controllers can be downloaded from our website. This package allows to read and log data on its own. It is also able to read and store the data table logged by the devices themselves. More information can be found on our website: DIS-2 Installation.

When required to write your own software to read the devices, the communication commands and protocol can be downloaded from these links, click on the device of interest:

To receive data from a controller without the control from a master, using the one-direction communication, perform the following steps:

The numbers of spaces in the examples are not representative for the true data output.